No longer a disastrous future lurking later in the century, climate change is already causing extreme weather, droughts and floods around the world, exacerbating existing inequalities and creating the conditions for further rounds of accumulation by dispossession. In addition to the climate, Earth System scientists warn of a series of converging crises, as rates of biodiversity loss, ocean acidification, land use changes and chemical pollution seriously undermine the stability of the biosphere. Long treated as a matter of secondary concern, the ecological question must now be placed at the heart of left politics. This presentation examines the current state of debates concerning the appropriate political response to the ecological crisis. Beginning with an overview of arguments over the analytical and political usefulness of the Anthropocene, I move into a discussion of the implications of the ecological crisis for a left political platform. Paying particular attention to the dispute between left eco-modernists and advocates of degrowth, I invite participants to debate the prospects for ecosocialism within the context of biophysical limits and persistent global inequality. One of the session’s primary aims will be to stimulate discussion on the prospects for integrating campaigns such as the One Million Climate Jobs initiative with a global environmental justice framework that highlights the socio-ecological barriers to renewed or expanded economic growth—no matter how green it may purport to be. 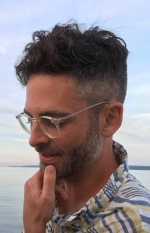 David Ravensbergen is a PhD candidate in Social and Political Thought at York University. He holds a BA in English Literature from the University of British Columbia, and an MA in Politics and Literature from the Freie Universität in Berlin, Germany. His research connects political ecology and green social theory with political economy to examine the possibilities for a radical green politics in the Anthropocene. David has recently contributed chapters to the edited volumes Augmenting the Left, The Dark Side of Globalisation and The Bloomsbury Companion to Marx, and is a divestment activist with the Fossil Free York campaign at York University.